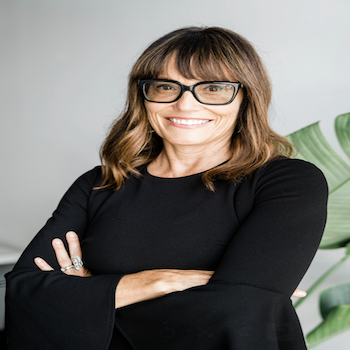 Tina Black had a successful career as a dental hygienist, but her husband Bryan Black saw her tremendous potential and knew she was destined to do great things for people and the world. In April 1998 they purchased Great Lakes Academy of Hair Design in Port Huron, Michigan, and Tina decided to become a cosmetologist. She completed the program at her own school and became an instructor there. When she heard about the newly forming Paul Mitchell Schools network, she jumped at the opportunity and immediately flew out to meet the company’s dean and cofounder, Winn Claybaugh. Tina loved what she heard and her school soon became Paul Mitchell The School Great Lakes, one of the 10 original Paul Mitchell Schools.

Tina also owned a salon from 1999 to 2006, including two years with internationally renowned salon owner, celebrity stylist, and educator Kelly Cardenas, her longtime mentor. Among other things, Kelly taught Tina how to teach her staff and students to become financially independent. Tina and her daughter Brianna Black-Petros currently own Paul Mitchell The Salon.

Tina has worn many hats at her schools, including learning leader, motivational speaker, success coach, education leader, and dream maker. Inspired by the book Be Nice (Or Else!) by Winn Claybaugh, Tina and her school director, Shaun Chiodo, developed a student-run program called the Be Nice Team; the concept has spread to all Paul Mitchell Schools. Tina also served as a partner appraisal leader (PAL), mentoring other school owners in the Paul Mitchell Schools network, and she worked closely with Dr. Susan Swearer, Professor of School Psychology for the University of Nebraska–Lincoln,

Continued to write the N-Lighten self-empowerment and anti-bullying curriculum for all Paul Mitchell Schools. Tina’s current project, a leadership networking team called Next Generation Compass, will train, inspire, and prepare the millennial generation for the workforce.

Under Tina’s leadership, her schools have won many awards within the Paul Mitchell Schools network for leadership, culture, facilities (best Wash House and Color Bar), and best store front, to name a few. Tina is heavily involved in the network’s annual FUNraising Campaign, which has raised millions of dollars for organizations like Cancer Schmancer, Food 4 Africa, Morris Animal Foundation, and Children’s Miracle Network Hospitals, to name just a few. Tina’s schools routinely rank among the top 10 fundraising schools, out of more than 100 Paul Mitchell Schools nationwide. She also serves as a Bright Pink Ambassador for the national nonprofit Bright Pink organization.

Tina has spent countless hours becoming the leader and mentor she is today. She is an executive director for the John Maxwell Team and she has been a keynote speaker for numerous organizations, including Compass, Chamber of Commerce, local businesses and salons, hair shows, and nonprofits, discussing topics such as “Get Your Leadership On,” “Leading the Next Generation of Leaders,” and “What Your Boss Won’t Tell You.” Tina and her business partner Shaun Chiodo lead online mastermind groups, training salon owners and managers in business and leadership principles. Their company, Next Level Salon Leadership, is a six-month mastermind program for salon owners to develop leaders. She has published two books (Be a Leader and Be Amazing), and she serves on the board of directors for the nonprofit Andrew Gomez Dream Foundation.

Tina’s passion to help people see their true potential and make the world a better place has led her to mission trips in Guatemala with the John Maxwell Team to train more than 25,000 leaders in all sectors of leadership. She dreams of traveling internationally with the John Maxwell Team as opportunities arise, opening more schools and salons, and mentoring and motivating everyone she meets.